“Every year on Midsummer’s Eve, Victor von Doom clashes with the forces of evil in a vain attempt to free his mother’s soul from Hell. Only when Doctor Stephen Strange — Master of the Mystic Arts and Earth’s Sorcerer Supreme — is convinced to join the fight, does the outcome have any hope of changing.”

The town of Tomatin is a small village in the Scottish Highlands, about 26 km southeast of the city of Inverness. The Tomatin Distillery was established in 1897 and still stands as one of Scotland’s largest distilleries.  A large portion of the whisky produced by Tomatin is used in blends, including its own brands of Antiquary and Talisman, but their core range of 7 single malts offer you a wide range of what Highland whisky is all about.  The Scottish Highlands are known to be an unforgiving and harsh environment, but Tomatin Whisky wants to help you see another side of this often wild and beautiful place.  They want you to “hear the truth: there is a softer side to the Highlands.”

This softer side of the Highlands is demonstrated perfectly with the Tomatin 12 Year Old.  This core range single malt was matured in ex-Bourbon and ex-Spanish Sherry casks and has a light and crisp colour.

It hits your nose with a light creamy warmth similar to melted butter, followed by pome fruits like apples and pears and finishes with hints of raisins and mixed nuts. The simple, yet complex layers continue on the first taste as vanilla and citrus peel coat your tongue with a light, oily consistency.

As the flavours fade, sweet fruits return to the palate with notes of currant and raspberry jam with a finish that includes roasted almond and toasted oats. It is an experience that executes exactly what it set out to do: to ‘bring out the softer side of the Highlands,’ and show you that even in the harshest of environments, if you take the time and know where to look, there are layers and beauty that people who don’t take the time, or know where to look, can miss. 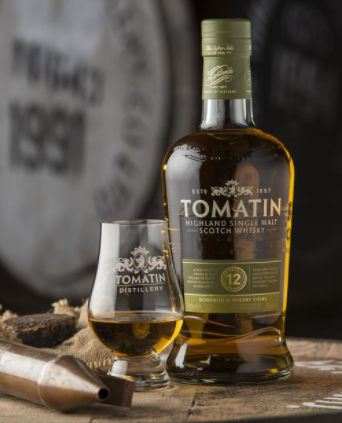 I’d actually say that when it comes to expressing a softer side to the highlands, Tomatin not only does it’s job – it exceeds it: because this scotch illuminates the softer side of whisky on the whole.

For a lot of people who are looking for a scotch that they can have on hand, all-year round, this light, crisp edition offers a taste that abides by no seasonality.

Plus, at a very reasonable price point, it’s a great one to ‘invest’ in. The easy-drinking taste makes it accessible to more people than your average dram, which also makes it highly shareable for those times when you have a visitor over who says, “Yeah, I’ll try a scotch.”

The Comic: Triumph and Torment

Similarly, if you or someone you know, is unfamiliar with the character of Doctor Doom, Triumph & Torment is a palatable way to get a deeper appreciation for this highly-nuanced character.

First released in 1989 as a graphic novel, ‘Triumph and Torment’ hasn’t had many printings, but thanks to services like Marvel Unlimited, Comixology and Hoopla Digital (where I read this wonderful story) the tale of Doctor’s Strange and Doom teaming up to fight Mephisto throughout Hades to free the soul of Doctor Doom’s mother, Cynthia Von Doom, is a great read for anyone interested in seeing a softer side of the Fantastic Four’s arch nemesis Victor Von Doom.

Writer Roger Stern does a masterful job of bringing dimension and depth to Victor Von Doom, who normally comes across as a single-minded despot, in search of absolute power and control over all. Stern takes the reader into the tragic past of the Von Doom family.

After years of torment from the Latverian Monarchy, Cynthia Von Doom uses a spell on Midsummer’s Eve to summon Mephisto from Hades in hopes of gaining the power necessary to give her people a deserving homeland.

What she did not expect was the toll that such a deal would take on her soul. After a failed attempt to intimidate one of the Baron’s guards, she unleashes a powerful bolt of energy, killing him. She soon realizes that her newly gifted powers came with no means of control, and her anger ends up killing every member of the town, including children.  Upon attempting to wish away her powers, a dying member of the Baron’s guards sneaks up and mortally wounds her before dying himself.

With her soul trapped in Hades for all eternity, Victor Von Doom will stop at nothing to free her, and embarks on a never ending quest for the knowledge and power to help free her from Mephisto’s realm.

When the Aged Genghis and Vishanti host a contest to name a new Sorcerer Supreme, all of the world’s greatest magic practitioners gather to claim the mantle of Master of the Mystic Arts.  Dr. Strange wins a narrow victory, but to claim his prize, he must grant a boon to the runner up, Dr. Doom, who demands assistance in freeing his mothers’ soul from Mephisto.  What follows is an action packed adventure through the depths of Hades, which is masterfully drawn by Hellboy creator, and comics legend Michael Mignola.

There is something comforting and really enjoyable to me about comic book art from the 70’s and 80’s. Maybe it’s being a child of the 80’s and my introduction to the world of comics was books (Specifically Marvel) from that time period, but Mignola’s artwork in Triumph and Torment left me spellbound and excited to do a deep dive on comics from that time period.

I imagine that bringing extra depth and character to super villains is a daunting task for any creator, and the end product doesn’t always land as well as anticipated with readers.  Triumph and Torment does a masterful job of this, and the team of Stern/Magnola with inker Mark Badger bring the reader a deeper understanding of Doctor Doom in a way that hadn’t been done before.

Pairing Triumph and Torment with Tomatin 12

Distilleries face the same challenges when attempting to bring a product to market that is both soft and accessible to the masses, but also complex enough for the more seasoned drinker. Tomatin balances this well with their 12 Year old, and it would make a great addition to anyones’ collection.

From beginning to end, this pairing was immensely enjoyable.  The experience of going on a high stakes journey through Hades with one of Marvel Comics’ seminal villains while enjoying a soft and and easy drinking dram from the Scottish Highlands was a complete Triumph, and the only Torment came when both the story had ended, and my glass was empty.

Looking for more about this pairing?

The Whiskey Geeks Podcast is now available wherever you listen to audio content.

We also get geeky on all things whiskey and comics on our YouTube Channel.

Listen to us talk about Tomatin 12 and Triumph & Torment in more detail below!